Billions of connected devices now comprise the Internet of Things (IoT). Such mainstream connectivity has facilitated the greatest expansion of the attack surface that the world has ever seen, introducing unprecedented threats of DDoS, buffer-overflow, memory corruption and zero-day attacks against industrial, commercial, medical, military and consumer systems and devices.

70% of the most commonly used IoT devices contain vulnerabilities (HP).

Our hyper-connected world has many organizations prioritizing security updates to legacy systems and devices in order to meet customer demand and to comply with government and industry standards and regulations. To mitigate risk to legacy systems already in operation, RunSafe Security’s Alkemist enables rapid security patching without having to touch source code. This ultimately reduces the attack surface, saving time and money on modernization costs while maintaining availability and uptime of mission critical equipment.

At the same time, commercial product managers are continuously assessing how best to manufacture devices with security built in, so as to gain a competitive edge while easing the growing security concerns of corporate stakeholders, suppliers and prospective buyers. For new devices, RunSafe Security can embed its cyberhardening technology in to the manufacturing process, reducing vulnerabilities while protecting manufacturers from liability and lawsuits related to a successful attack post production. 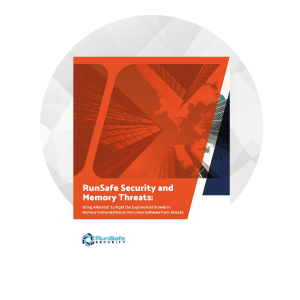