Hundreds of billions of lines of compiled code run mission-critical enterprise systems, including the interpreters required for every web-based application and the hypervisors, containers, virtual machines, web servers, and data storage essential to IT and cloud virtualization. With each new release, developers introduce code weaknesses and errors in this software that create new memory vulnerabilities.

DoD Red Teams report that up to 75% of cyber kill chains today depend on such memory-based exploits, and in late 2019 MITRE, NIST, and DHS named memory vulnerabilities the top software weakness.

Built for self-service and native integration with the leading enterprise DevOps tools, RunSafe’s solutions automate transformations that defeat all known forms of memory corruption and exploitation. Even when inoculated programs contain known or unknown vulnerabilities, bad actors can’t find them because of the extreme memory location entropy introduced by RunSafe’s tools. This frees up tremendous amounts of resources from scanning, alert monitoring, emergency patching, and developer rework that are no longer needed once RunSafe Security’s products are in place. 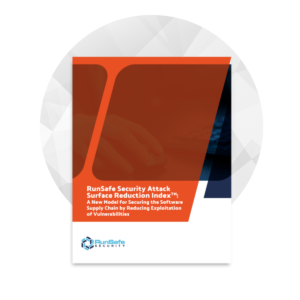